A new vision to revitalise The Entertainment Quarter

The Entertainment Quarter (EQ) has been working on a new emerging vision to transform EQ into Sydney’s premier community, entertainment and media district within a world class sporting and entertainment precinct. Check out our proposal and information here (EQ Emerging Vision).

This bold new vision is centred around complementing and elevating the existing on-site arts and film industries.

EQ’s rejuvenation would elevate Sydney’s reputation as a world-class city, attract new investment, generate jobs and boost liveability and open space access for the Centennial Park community and for all Sydneysiders.

In partnership with adjacent facilities, a revitalised EQ precinct will play a vital role in enhancing Sydney’s global attractiveness for investors, students, tourists and visitors, as well as Sydney’s diverse communities of residents and workers. 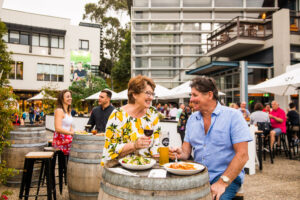 Key features of the new vision 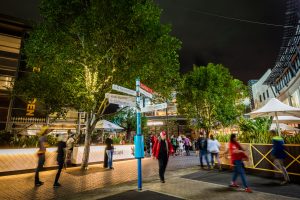 Why are you doing this?

The EQ is physically located at the heart of existing world-class sports, venues, film and television facilities.

The Government and private sector have recently made substantial investments into new and adjacent modern facilities and infrastructure. To not match this investment and properly integrate EQ to its full potential would be a major missed opportunity.

Why hasn’t EQ worked so far?

Despite the best intentions, the precinct does not work as planning and regulatory constraints do not match changes in community needs for what should be a world-class meeting place for Sydneysiders.

The EQ precinct has struggled ever since the old Showground site and its buildings was first leased out under the Carr Government in 1998.

Since then, two other groups (Lendlease, Colonial First State) have tried but been unable to make the precinct viable due to the constraints governing the site.

We believe that to fulfil its true potential, EQ requires a comprehensive reinvention to provide a precinct that can support and elevate Sydney’s cultural and entertainment industries.

EQ is in discussions with the NSW Government to create a regulatory environment that will allow EQ to not only work but thrive.

With the right regulatory environment, there is no reason why Sydney can’t outshine Melbourne when it comes to community, sport and entertainment precincts.

Does EQ support the removal of cars from Moore Park East?

We are very sympathetic to the views of residents and others who wish to see cars removed from Moore Park East. In fact, the revitalisation of EQ could assist with the staged removal of all cars from parking on green space by adding additional levels to the existing car park.

Will there be community consultation?

Yes. Significant consultation has already occurred in the development of the new vision and EQ is committed to consult with the community at a greater level then is required through the statutory planning process. EQ understands that genuine consultation is required to ensure the precinct meets the needs of the local community.

What have other stakeholders said about the new vision?

Feedback so far from stakeholders has been extremely positive. Community research from September 2021 has shown that there is overwhelming strong support for the masterplan.

Some 71 per cent of the Sydney-wide community support the need for change and the plans proposed.

What about the surrounding local community and residents.

In that same survey, the sentiment of residents in the local government areas immediately around the site were canvassed with 70 percent supporting the proposal and importantly, only 5% opposing (the remaining 25 percent were undecided).

Why is EQ seeking a long-term lease?

The NSW Government currently allows for long-term leases for up to 99 years on land which is considered State Significant, including The Rocks, Darling Harbour, Western Sydney Parklands and Sydney Olympic Park.

Each lease term is negotiated on a case-by-case basis on its merits.

The proposed investment of $2 billion and current masterplan’s features are predicated upon a longer term lease.  Reducing the term of the lease to 50 years maximum would have a significant adverse impact to the future amenities to be provided to the community and in all likelihood would be a disincentive to future investment meaning that there is a great risk the site would remain underutilised and unchanged.

We are still in the early stages of preparing the plan but will continue to consult with stakeholders as we move towards the planning approves stage. However, government support is required before detailed planning can occur.

We will keep you updated on our proposals and our plans for The Entertainment Quarter, and continuing to ensure we are an important part of Sydney and our local community – and we continue to welcome you and your families to EQ and watch as we revitalised EQ for the future.